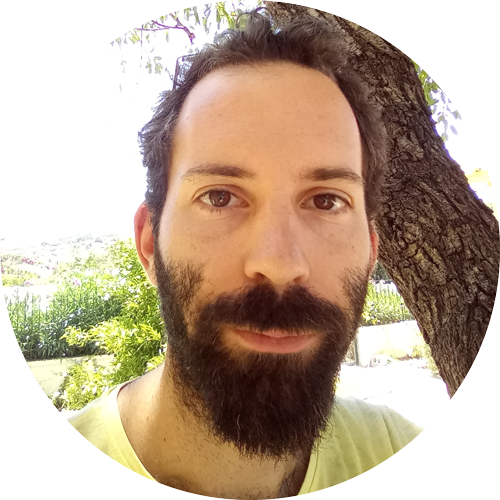 Christos Dedemadis was born in 1988 in Athens. In 2011 he started his education in acting, first in Archi drama school and then in Diomidi Fotiadi drama school. In parallel, he kept practicing in yoga, qigong, meditation and the martial arts kung-fu (eagle-claw style) and ninjutsu.

In 2012 he starts participating as a co-founding member in the theatre team ''Viotiko Theatro'' where he worked on body and expression through a variety of methods, aiming to the creation of an intense energetic field in the performing result. In the same period he came in contact with different kung-fu styles such as hung-gar, choi mok pai, chen tai-qi and bagua.

In 2015 he started his education in shiatsu and acupuncture in Academy of Ancient Greek and Traditional Chinese Medicine, Athens. In 2018 he attended the classes ''Greek Herbs'' and ''Chinese Herbal Medicine'', in the same school. For the last 6 years he has been practicing shiatsu and acupuncture and more recently herbal medicine with greek and chinese herbs as well as energy healing methods reiki and sutratma. He also uses qigong and other types of physical exercise into the frame of therapeutic process or out of it by giving private or group lessons.

During the last years he has collaborated with cultural spaces and spa centers by giving therapeutic sessions, qigong and Traditional Chinese Medicine lessons. Apart from qigong, he continues practicing in tai-qi (yang and chen style) and meditation. He continues examining the body mechanics, the therapeutic tools of Chinese Medicine and the energy healing methods.

His basic interest and vision is awareness in individual and collective level through multi-dimension culture, self-realization study, art, cooperation and natural living.