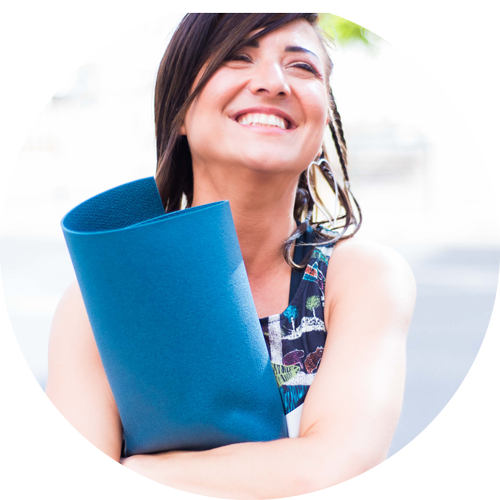 Katerina came in contact with her physical body through ballet at the age of eight and as an adolescence she excelled to become a member of the young dancers in the Thessalian Ballet under the guidance and mentorship of Tania Miltenova and Ges Mihov. It was not until 2007 that she first came in contact with the philosophy of yoga, and ever since she has tried not only to deepen her physical practice, but also to cultivate a yogic way of living. She loves singing and dancing and over the last few years has enjoyed the grooves of the pranic rhythm.

The yogic path introduced her to different kinds of practices like; Ashtanga, Hatha, Anusara Therapeutics, Acroyoga, Aerial, Prenatal and Post natal Yoga, Bhakti Flow, Jivamukti and Rainbow Kids Yoga. She is grateful to have been influenced under teachers such as Rusty Wells, Petros Haffenrichter, Sharath Rangaswamy, John Friend, Todd Tesen, Todd Norian, Naime Jezzeny, Sianna Sherman, Sue Elkind, Cayetana Rodenas, Vivi Letsou, Sofia Xirotiri, Alessandro Ortona, Panos Katsandris but the most important lesson she has learnt from all her yogic teachers is a constant reminder of being present.

Until today, she has completed 700 hours of education in different interpretations of the yogic path.

She loves traveling and exchanging stories, experiences and vibes in different yoga meetings such as teacher trainings, yoga conferences and studios worldwide. She has been in Barcelona, Bali, Prague, Mallorca, San Francisco, Geneva and New York but recently understood that returning to her mat is the most valuable gift that the philosophy of yoga has offered to her. The last few years she is sharing her yogic experiences in different studios in Athens while she is also attending a postgraduate programme in Athletic Studies at the Hellenic Open University.

Her dream is to remain a student.